As Ryan Broekhoff sets his eyes on Rio, what are his chances of making an NBA roster?

Figure 1: Broekhoff rises up for a jump shot. Photo: alchetron.com

Ryan Broekhoff, the Australian basketballer set to play for Australia in the Rio Olympics, has his eyes set on the gold. Nonetheless, Broekhoff says “the NBA has always been a dream of mine since I was a little kid.” But what are the chances of this happening?

At 6’7”, just under 100 kgs, with a 6’8” wingspan, Broekhoff has the same physical tools as Golden State Warriors All-Star Klay Thompson, and can subsequently start at the 2 or 3 spot.

He has proved he’s one of the best shooters in Europe hitting 1.9 threes on 47% shooting for Lokomotiv in the elite Euroleague last season, to go along with a well rounded 8.5 points, 3.4 rebounds, 1.6 assists and 1 steal per game averages.

He also has the ability to switch onto bigs defensively, as he played as a stretch four in college for Valparaiso University, a skill that is a big plus in the modern, switch-heavy NBA.

“I think I can defend most positions. With the NBA pushing for more outside shooters, hopefully a team will want my skill set”, Broekhoff said.

Angus Crawford wrote in his June 16 article for Sporting News that a number of NBA teams have shown interest and are monitoring his situation closely.

If Broekhoff proves his worth in the Olympics, teams such as the Milwaukee Bucks, Indiana Pacers and Los Angeles Clippers appear to be his best fits, due to their need for shooting, defense and Aussie influence. 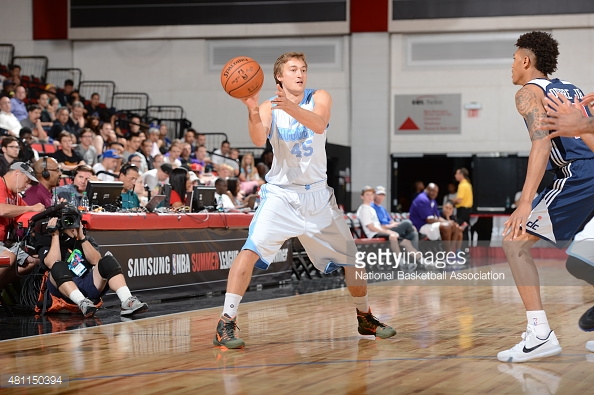 Indeed, the value of Australian players has grown in the overseas market, as Dellavedova, Bogut, Baynes, and Mills have all been involved in champion teams, while Joe Ingles is lauded as valued teammate.

“My role on the Boomers will most likely be to defend and space the floor for the other guys like Aron Baynes, who can score at will,” he says.

Even though his dreams are big, Broekhoff pays little attention to NBA speculation.

“I let my agents handle NBA interest, so I couldn’t tell you what teams might want me, but I don’t want to get distracted by rumours,”Broekhoff says. “It’s just a waiting game, hopefully something comes up, but if not, I still have a contract with Loko for next season.”

While the NBA is in sight, his sole focus right now is to represent his country.

“I saw games at the Sydney Olympics as a kid in 2000, and I thought, this is the best thing ever, I’d love to be a part of this, so the Olympics are my number one priority right now, and bringing home a gold medal is the number one goal,” Broekhoff said.

Video of one of Broekhoff’s performances for Lokomotiv last season: